I'm sitting in my hotel room in Clearfield, PA some 206 miles from my start this morning at Martin Motorsports in Boyertown, PA. A number of folks joined me this for the big departure. 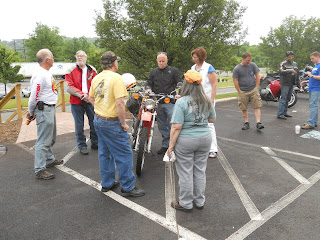 But I soon left 'em all behind in a cloud of two stroke smoke! 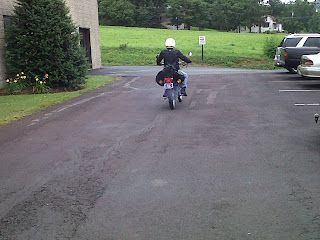 I wish there were lots of stories of hardships overcome, incredible scenery, and fascinating people met but the truth is, it was just a day in the saddle. There was precious little drama. OK, I did blow a fuse in the main battery circuit after riding in some heavier rain in the early afternoon but even that's not a very big deal on this bike. It's got a magneto and even without a battery in the circuit it runs (and has lights) just fine. My only other drama was self inflicted. Late in the afternoon I ran the bike out of gas! I was actually less than ten miles from my intended destination of Clearfield, coming down a long hill when the bike just stopped running. My first thought was that I had lost the engine. But then I realized it hadn't seized but rather just stopped firing. Pushing the bike to a safe spot alongside the highway I realized that there was no gas in the fuel line.

Opening the cap I was stunned to see nothing but emptiness! Now there is a bit of good news here. Unlike many older bikes Hodakas have no reserve position on the petcock. However it is a "saddle" type tank that straddles the centere tube of the frame. So, even when there is no fuel remaining on the left side of the tank to feed the engine there is still fuel (maybe a pint) on the right side on the saddle. All one has to do is get it over to the left side. Which I did with a combination of leaning the bike over, shaking and sloshing the fuel, and eventually by using a siphon tube. Did all that. Started right up and rode off to the next gas station only a mile away. That won't be happening again! I think that all my testing never showed up how much the fuel use increases when riding at high speeds and especially wh\en climbing long grades in 4th gear. Anyway, no harm no foul.

Aside from those little highlights I feel pretty good about the bike, motor and all my gear. The motor now has overf 500 miles without trouble, the bike itself has about 100 more than that, and all my gear worked perfectly. And this is now officially the longest trip I've ever taken on a two stroke bike!


I plan to turn in early tonight in order to get a sunrise start and hopefully make about 300 miles tomorrow. Goal is to get to western Ohio, maybe around Bowling Green or a bit further. Stay tuned.