Soooooo.... Today was a little more interesting than I ever planned. My early morning departure was accompanied by a beautiful morning ,though a little chillier (52 degrees) than I might have hoped. 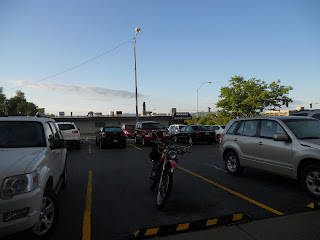 With high hopes for a big miles day over to Missoula, off I went. Though I did notice that the bike started hard this morning. When all is right with the world 2-3 kicks is all it ever needs. Today it was like a dozen or more. Hmmmm. Usually this means that the points need to be reset so I mentally put that on my work list for the evening. Then , about 15 miles into the ride it did this strange little misfire/backfire twice in about 15 seconds though it never did it again. Gas stop at about 70 miles - no problem, except the bike started hard again. Then things got more entertaining. At about 90 miles the bike just laid down and quit running. Off to the side of the road I coasted. Fortunately at least a road with a wide shoulder. I was suspicious of two things - the quality of the gas I had just purchased (one of those "no brand", "one grade only" places I mentioned a couple of days ago), and the points gap setting. Checked the fuel - no sign of water or other crud, so I dove right into setting the points. In a commentary on the goodness of motorcyclists, within 10 minutes of the time I rolled to a stop, a guy on BMW R1200GS stopped to ask if he could help. I already had the tools out and was deep into setting the points so he really couldn't help besides snapping photos) but it's reassuring to know that whatever happens, someone is likely to stop to help. 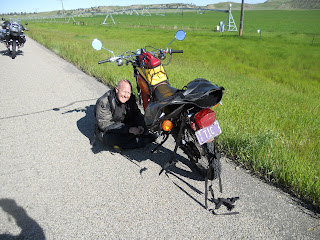 I found the points gap kinda small, reset it to spec and the bike started up just like new. Whew. That was easy, huh? So I took off once again and after another 30 miles or so decided top stop for gas again, this time at a name brand place with premium fuel. That went ok except when I tried to restart, nothing! Not even the most benign little pop! Nothing! So, now things were more complicated. I pulled the bike over to the side of the parking lot, unloaded all my tools and crap, and began the process of tracing wires, checking points, changing spark plugs and all the "easy" stuff. Still no action. I did establish that there was no spark so it was easy enough to focus on electrics. I was carrying a complete stator plate assembly with coils, points, and condenser and I elected to change the whole assembly out rather that mess around with individual parts. Unfortunately I didn't have a phillips screwdriver big enough to remove the stator plate. Just then my savior presented himself. An old Montana Cowboy, name of Roger, walked if and simply asked "Brokedown?" I told him what was going on and he proceeded to tell me much of his life story, at least the part that related to small engines. In due time we got around to the part where he asked "need any tools?" I told him the screwdriver story and he said he'd go back to his farm and get one. Who knows where he went but in about 1/2 hour he was back and fortunately he had what was needed. The parts were changed, the points reset, another new spark plug installed and we were back in business. I took a local ride for a couple of miles and all seemed OK so I loaded back up (a not inconsiderable process), thanked my new BFF Roger profusely, and went on my way. 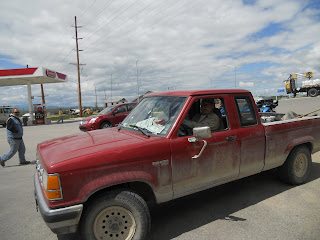 But, several hours had been lost in the course of these two little misadventures. Missoula was out of the question but I rode almost another 140 trouble free miles (with the new parts installed) to Helena, where I'm spending the night.

I had hoped to be able to spend some time today doing photos of some of the increasingly compelling landscape that I'm traveling through. I hope you'll forgive me for not making photo stops in the face of the restart difficulty that I endured today. Ideally we'll do some of that tomorrow. There really are snow-capped peaks nearby! 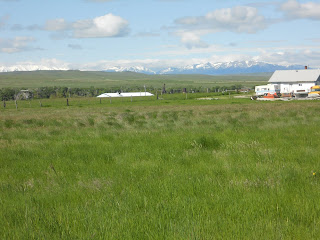 The plan for tomorrow is now to get an early start, make for Missoula and then continue on through Lolo Pass and the Bitterroots into Idaho. From there it is a short jaunt to Athena, OR on Wednesday. But, as I was so effectively reminded today, nothing can be taken for granted and the whole theme of the trip can change in an instant. Here's hoping the next 48 hours are great ones! Thanks for being here with me.

Just a reminder that there are always more pictures on my Smugmug Photo Share. To check 'em out CLICK HERE