As promised a couple of days ago I have slowed the pace down a bit and only did just short of 200 miles today. The plan for the balance of the trip goes something like this - Billings, MT tomorrow then on to either Helena or Missoula on Monday. Then through Idaho to Lewiston, ID on Tues and a short day on to Athena Wednesday.  Either Monday or Tuesday will be a long miles day through the high country and I'm kinda waiting to see what the weather's doing before I choose which day to "go long.' That's the reason for the question whether I'll go to Helena or as far as Missoula on Monday.


Today was actually a pretty easy day. The challenge of longer distances between towns and fueling opportunities was present today with segments of 67 and 68 miles between gas stations. These are distances I can still make with the stock (2.9 gallons - so it says here!) gas tank. Nonetheless I am now carrying an auxiliary gas can in the tank bag. All of 1.2 gallons but that could make a huge difference in the mountains. Sure looks dorky but it does the job. I'm afraid the Giant Loop guys never imagined their Fandango tank bag being put to such use. 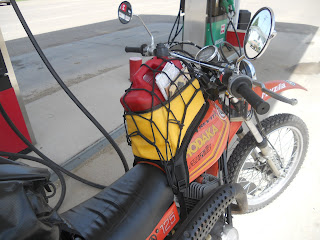 With the extra tank I'm pretty confident of 130 mile range , even with such distractions as headwinds or mountains (coming soon!)

So today's trip took me from Pierre (no the Missouri river did not flood us out!) to here in Sturgis, SD. Yes, THAT Sturgis. The Sturgis rally is still weeks away but there are a great number bikes around from the "Motor Company." In this crowd a 1977 Hodaka is quite the anomoly. Nonetheless, people seem genuinely interested. I stopped off at Sturgis Motorsports to pick up some 2-stroke oil. They are a Yamaha, Suzuki, and BMW dealer and I have to say that the BMW touring crowd hanging around the shop on a Saturday afternoon were pretty amused. No, make that amazed! 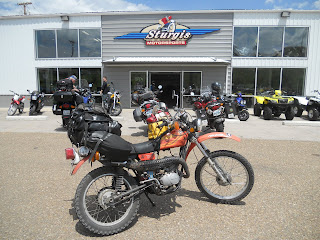 I also made the mandatory cruise up and down the main drag and even stopped in at The Knuckle Saloon (legen-wait for it-dary!). It's pretty hard to be a bad ass in Sturgis on a 125 Hodaka. For a moment I considered getting a Hodaka tattoo while I was here, but thought better of it in time! 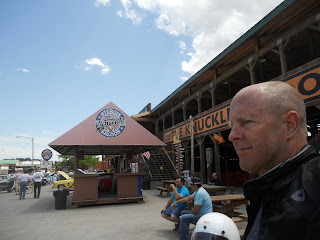 Likewise, I'm not sure the bike felt as though it was among it's natural peer group sitting in front of the Knuckle. We didn't hang around long. 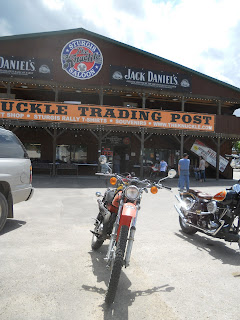 Lots of milestones to report today. First of all, I've now been riding for a week - a full seven days and an average of about 275 miles a day. I'm now in the Mountain Time Zone. I'm over 2/3 of the way through the trip. And my buzzy little engine that I built just for this trip has now run for over 2200 miles, including testing. I did some routine maintenance again this afternoon...reset points, change spark plug, adjust chain and the like. I'm up at 4000 feet above sea level now and decided to go ahead and make a jetting move. Needle one position leaner and main jet leaner by 5 counts. By later tomorrow as I get near Billings I'll be closer to 6000 ft above sea level , so it's time.

Nothing else too exciting to report. Just plugging along. I plan to get an early start tomorrow and the next 3 days as they are all gonna be long ones. Stick around for the next few days as I try to close this thing out! Thanks for visiting.