Today might well have been even more uneventful than yesterday. All I did was get an early start and proceed to hammer out 316 miles today! Not just that, but there was absolutely no running out of gas and the associated delays. Fun!

The day started out cool (mid 50s) when I departed Clearfield at 7am. My first destination was the McDonalds in Clarion, PA, some 60 miles away. There I met up with a local Hodaka rider, Mike Perrett, who arrived on his 175cc Hodie.
Now Mike isn't just an ordinary Hodaka enthusiast. He's another certifiable crazy who rode this same 175 from his Western PA home to Hodaka Days in Athena, Oregon in 2008. See? It's not just me!  Anyway, it was good to meet up with Mike, share some coffee and and some chat, and then he joined e on the road for about 40 miles. Now at least a part of this ride had 2 Hodakas riding in tandem! After about an hour's ride, we stopped for gas and parted. He for home. Me for points West!


By shortly afternoon I had entered Ohio near Youngstown. I had successfully crossed the Appalachians and ridden in two states, with only about nine more to go! Geez. Anyway, the main themes of the day were smaller hills and straighter roads. I'm afraid straight roads are my fate for at least the next couple of days as the route across Indiana and Illinois is , for the most part, dead straight. It'll be at least late Wednesday before I possibly get a little reprieve with some twisties in Wisconsin.

I rode till about 5:30 today in order to get those 300+ miles behind me but, frankly, I can probably do better yet. Those boring flat, straight roads also are faster. Plus tomorrow I won't have any delays associated with meeting up with other folks so I plan for another 300 miler which should put me in the vicinity of Chicago or beyond. That's of course only if I'm not just plain overcome by the excitement of life on the road! 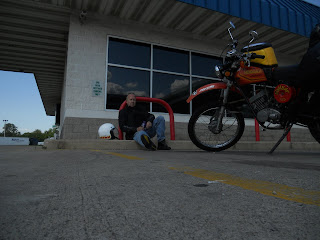 I'm over 500 miles into the trip so far but really haven't visited anyplace new yet. Hopefully I can turn that around in the next few days. Stay tuned!