Day 11 - Lewiston, Idaho to Athena, Oregon DID IT!

Today started out much like the others but with a very important difference. If I could eke out just another paltry 124 miles, I would complete my journey to Athena, Oregon. A restless night was followed by a very early wake up. At about 4:30 I could no longer sleep, what with visions of all the possible things that could still go wrong dancing about in my mind. There was, however, little I could do save get to it!

I started with a few maintenance items on the bike then hit the road. I was, yet again, following US 12 and spending quality time with my now good friends Mr. Lewis and Mr. Clark. 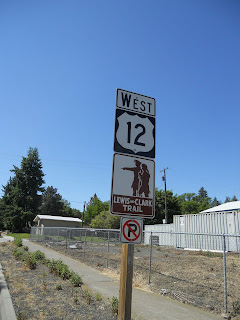 The terrain had changed a great deal from the majesty of the mountainscapes of the past two days. Now I was passing through the rolling hills of SE Washington, and later in the morning NE Oregon. 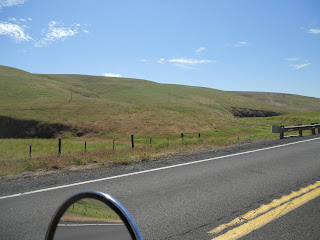 Just about a hundred miles took me to Walla Walla, WA where I made a turn to the South (so long Lewis and Clark!) toward my final destination. A further 25 miles or so landed me in Athena. 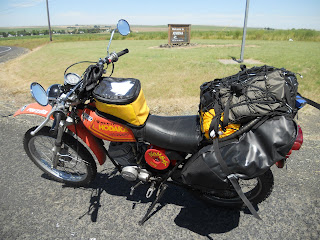 First stop was downtown for a cup of java and to just decompress for a half hour or so. 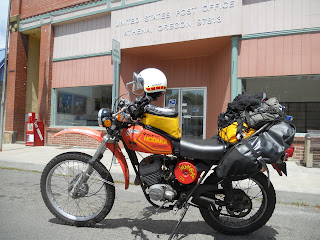 Then it was off to the local park which is the site of Hodaka Days, my main reason for coming here. Hodaka Days is an annual reunion event for the long defunct motorcycle brand that was based here in Athena. Hundreds of enthusiasts and hundreds of bikes, all ring-a-dinging their way around town for 4 days. 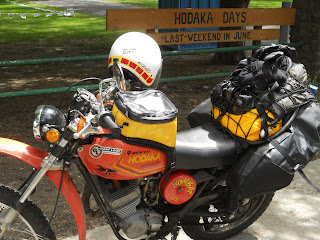 Hodaka Days 2011 doesn't officially start until tomorrow, Thursday, June 23. I'm overnighting in my hotel in nearby Pendleton, OR. and will head back to the event sometime tomorrow afternoon. Earlier this afternoon I did a lengthy interview with a reporter from the local newspaper and a short time ago they sent out a photographer to capture my smiling face and my trusty steed. Friday's publication, so I'm told. Anyway, what I most need is uninterrupted sleep. I plan to sleep in tomorrow, do the badly need laundry, and even begin working out the details of how I will get home. Remember, the bike is coming home in a truck. Ride it home? I may be nuts, but I'm not crazy!

I'll be posting throughout Hodaka Days (till Sunday) so don't bail out quite yet. Several more days of pictures and stories are still coming! Gonna go collapse now. Thanks for being with me throughout the ride!

Just a reminder that there are always more pictures on my Smugmug Photo Share. To check 'em out CLICK HERE