Three Weeks and Counting. Here's the Route We Plan to Follow!


Time's passing quickly and the clock is winding down toward our June 12 departure from Martin Motorsports in Boyertown, PA. Aside from the bike mechanical work which continues unabated, lately I've been spending most evenings with my new favorite authors and websites, Rand McNally, MapQuest, and Google Maps. From the beginning this entire trek was envisioned as a transcontinental crossing routed entirely via secondary roads. Perhaps not quite so epic as the trip described in the road warriors' classic book Blue Highways by William Least Heat Moon (a trip made in 1978, by the way. Hey, that mid-late 70s connection raises it's head again!) but at least our own little version. That book is still available on Amazon, by the way. Check it out. From the inception, one important goal was to never set foot (tire?) on an Interstate highway. The "no Interstates" thing isn't just about getting in touch with the  pulse of America. It's also about being at least somewhat prudent while traveling on a 125cc, 13 horsepower, 45 mph motorcycle that, frankly, would make only slightly more impact that a bug splatter on the front of a 75mph Freightliner bound for Salt Lake City! All that being said, we've now got an (approximately) 2784 mile route to Athena that hopefully meets our needs.

Because we're getting a little bit of a later start on Sunday the 12th, and probably not leaving Martins until about 9:30, we've set modest goals for the first day. The plan is to find our way through the middle part of Pennsylvania, across the Susquehanna River, on through State College, and overnight somewhere in the Clearfield/DuBois/ Brookville area of Central , PA. Less that 300 miles the first day.

Day 2 we're aiming for Western Ohio, maybe around Napoleon or Bryan and then on to somewhere near Rockford, Ill the third day. After we turn the corner around the bottom of Lake Michigan we'll head a little more North before turning West. We plan to skirt Madison, Wisconsin and then head across the Mississippi at Prairie Du Chien, WI and on into Iowa on Day 4.

After Iowa we'll slowly work our way North and West and eventually get ourselves established on US Route 12 somewhere in South Dakota. We'll basically then follow 12 nearly the rest of the way, at least until we reach Walla Walla, WA where we'll make the brief southbound sprint across the Oregon border and on into Athena.

The plan is loosely based on something like 300 miles a day. Sometimes slightly more, sometimes slightly less. Once we get to the wide open West, obvious towns in which to stop overnight will dictate out daily mileage. Everything panning out perfectly would find us in Athena after 10 days, arriving on Tuesday, the 21st. That means we've got 3 days or so of "gravy" - days to allocate to touristy stuff, resting our tired and sore butts,  or to replacing fried pistons alongside the road!

Ten days on the road will be plenty of time to see the sights and there are more than a few along the way. The latter part of the trip, especially, is full of important historical highlights related to the Lewis and Clark Expedition and also the opening of the West in the 19th century.

Of course, another highlight could be just meeting friends and enthusiasts along the way. If thislooks as if it comes somewhere near you - feel free to contact us, or better yet, come out and ride with us for a while (If u can stand goin' bad slow!)

Gotta get back to work now. There is still lots to do on the bikes and this is a big week - need to do a bunch of miles and a bunch of maintenance work !

But before going, here's another thought provoker. I've told many people that these old bikes are easy to work on...that they're "simple like a lawnmower."  True enough. However when I was cutting the lawn yesterday I noticed something a bit disturbing. 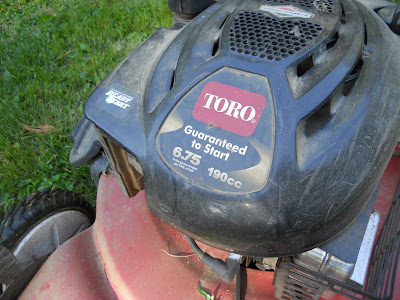 Yup, my lawnmower has a bigger engine and, for all I know makes more torque. Geez. And I'm gonna ride this thing to Oregon? Sure wish my Hodie was "Guaranteed to Start."