And Those Other Two Strokes - What's Up With Hodakas? 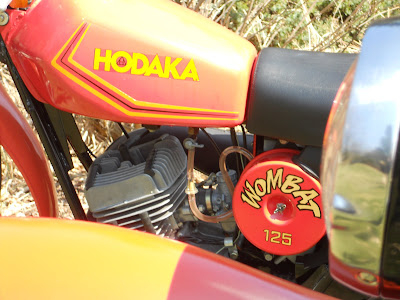 This whole trip is a hearty serving of "not so easy" and it might seem that we've complicated things by electing to travel on a pair tiny two stroke bikes built over 3 decades ago. By a firm that went belly up only about a year after these bikes were shipped! Uh, yeah. We've had several questions about the whole "Hodaka" thing and our connection to same, so we thought we spend a few moments here telling a bit of the story of the brand and a little about Hodaka Days, the event we aspire to travel to.  Here ya go.... 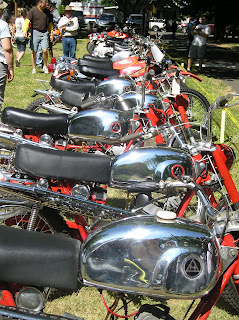 The Hodaka Story (Our Abridged Version)
In the early 1960's, in the tiny town of Athena, tucked away in the northeast corner of Oregon there was a firm known as the Pacific Basin Trading Company - PABATCO.  PABATCO dealt in farm supplies - grain, fertilizer and such. Seeking to expand an existing market for their products beyond their home in the Pacific Northwest, they entered into a trading relationship with Yamaguchi Motors of Japan. In a 60s world where international currency exchange was hampered by substantial regulatory hurdles, Pabatco ginned up a scheme by which they essentially traded wheat to Japan in exchange for Yamaguchi's line of motorcycles. No currency involved! Brilliant! Did I mention that PABATCO was inhabited by an inordinate number of motorcycle enthusiasts. By the end of 1962 Yamaguchi Motorcycles had become the mainstay of PABATCO's business - thousands of units had been imported and were being distributing through a dealer network of some 400 shops nationwide. 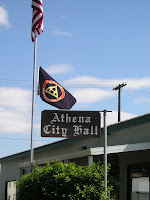 Then in early 1963 there was what one might consider a minor setback. Yamaguchi declared bankruptcy and, almost overnight evaporated from the face of the earth. This not only left PABATCO in the lurch, with no product, but also threatened to bring down Yamaguchi's engine supplier, the Hodaka Industrial Company of Japan. One can only imagine the frantic phone calls, telegrams, and telexes (telexes? - prehistoric stuff. Look it up.) flying back and forth between Athena and Japan that, in very short order, yielded a decision to build a whole new series of bikes as a cooperative effort between the two companies, PABATCO and Hodaka. The hard core dirt bike nut jobs in Athena would both design and market the new line of motorcycles and Hodaka Industrial would manufacture not just the engines, but the entire bike! Thus was born the Hodaka motorcycle brand.

By 1964 the first PABATCO designed bike arrived in the United States. That initial Hodaka Ace was a single cylinder 90cc two stroke machine that incorporated many of the best ideas brought forward by the Athena enthusiast crowd - like lightweight double downtube frames and other features that weren't found on competitors trailbike offerings. Using some of the best competition machines of the time as benchmarks Hodaka came to the market with a very advanced machine, and best of all it had the  lights and all the other street legal equipment necessary to allow riders to simply ride to the trailhead for a day of fun! Priced competitively, it was an immediate success!

By 1966 Hodaka had shipped over 10,000 motorcycles. At the same time the brand was achieving success in a wide variety of competition venues - from Motocross, to road racing, flat track, desert racing, and even observed trials. Through the balance of the 1960s Hodaka was a important player - both in the dealership or on the track. An increasing variety of models were introduced. Among the notable were the 125cc "Wombat" and a ready to race bike, the "Super Rat"  for just under $500.

Unfortunately, by the early 1970s some other marketplace dynamics were beginning to emerge and these would ultimately prove problematical for the little powerhouse from Oregon. Most notably, the Japanese "Big Four" manufacturers (Honda, Yamaha, Kawasaki, and Suzuki) began to see major opportunity in the exploding dirtbike/trailbike niche. With their sheer size and resources, as well as their large dealer networks and the ability to subsidize dirt bike pricing with their street bikes, the Big Four moved inexorably into Hodaka territory. Hodaka fought back with additional new models incorporating many of the latest advancements such as 21" front wheels, oil injection, reed valve induction systems for increased torque, and even an all new larger displacement 250cc bike. In the end though, it was a matter of too little too late as the economic recession of the late '70s sealed the little firm's fate. Not only had the competition come directly after Hodaka but the dollar was devalued against the yen, making Japanese products increasingly expensive for the American market. Plus, there was a glut of Japanese competitors' bikes already landed in the U.S. that were being sold at "give-away" pricing. Like so many firms before them, the business model just didn't work any longer. The manufacturing contract with Hodaka Industrial was terminated and the company was shut down in 1978.

So how is it that an obscure brand like this, with probably less than 100,000 bikes sold over a period of less than 15 years still appeals to enthusiasts to this very day? Maybe it's because they truly were great little bikes. And there are still plenty of enthusiasts riding them daily in the dirt and in vintage competition across the country. Maintenance is fairly straightforward and parts are pretty readily available from dedicated suppliers like Strictly Hodaka. 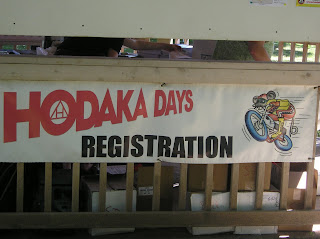 And then there is HODAKA DAYS, the event we aspire to attend !

There are plenty of fun things to do with your vintage Hodaka but one event enthusiasts don't want to miss is the annual Hodaka Days celebration in Athena, Oregon.  This event, put together annually for over a decade now by the Hodaka Club and especially by the club's high energy president Paul Stannard, has become an fixture on Athena's calendar the last weekend of June. Hundreds of enthusiasts from around the country descend on the tiny town for parades, a bike show, the chance to schmooze with former Hodaka/Pabatco employees, competition, and bench racing of every type. This year the event is from Thursday June 23 through Sunday June 26. Our hope is to arrive on or about by Friday, the 24th. Check out some pictures from Hodaka Days 2009. What's not to love about a company who was confident enough to label their products with some of the quirkiest motorcycle names ever. Road Toad, Dirt Squirt, Wombat, Combat Wombat (!), and Thunderdog! 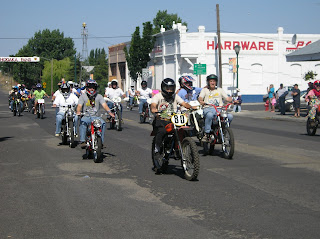 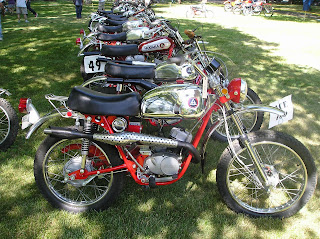 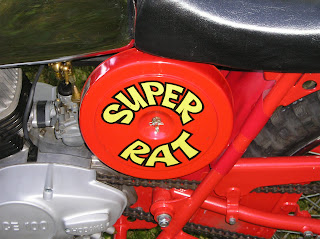 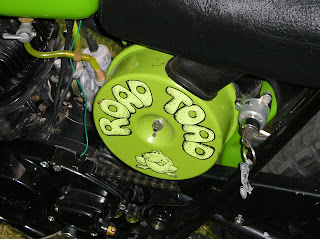 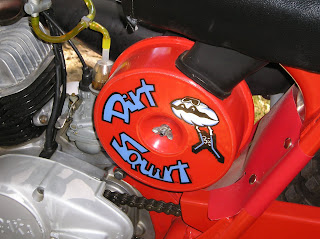 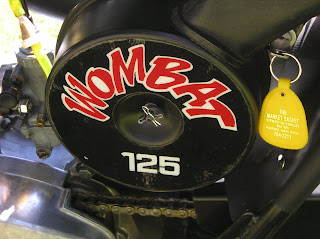 Stay tuned for more info on our upcoming trip. Shortly we'll have some info to share on the specific bikes we're taking, preparation details, and more details about our route planning Only 41 days till we leave...doesn't seem like a lot of time does it?