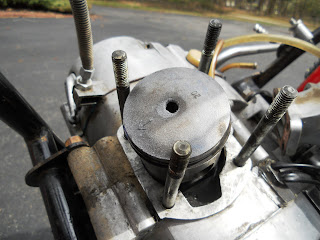 Lemme get this straight. You want to ride all the way across the country on an antique device that's known to occasionally do things like this?


Sometimes it's a bit disturbing to have an engineering background. Part of engineering is anticipating problems, and their solutions, even before they happen. I went for a 50+ mile ride yesterday and another one today as part of the pre-ride testing program. Those thankfully trouble free hours of tiddling around the back roads near my home left plenty of time for my mind to wander. Unfortunately it wandered into a place that I would rather it had not gone. It strayed off into the mental gallery of pictures of motorcyclists (OK, me!) standing alongside the road, immobile. The victim of the treachery of old two stroke motorcycles. Of course it is necessary to consider this. In just 5 weeks now we're going to take off on a trip of almost 3000 miles. Now if I averaged a paltry 40mph for this trip it would take some 75 hours of riding time. Right. 60 minutes to the hour means that's it's a 4500 minute cruise from here to Athena. Now the disconcerting part. At 40mph the 125 Wombat engine is turning about 5200 rpms in 5th gear. Multiply that out and it means that my buzzy little ring-a-ding is going to turn over a minimum of some 23 MILLION REVOLUTIONS during the course of the trip. 23 Million! That poor little piston, which would fit nicely in the coffee cup I'm holding in my hand, is gonna go up and down 23 million times. The tiny crankshaft, now almost 35 years old, is going to spin around in those bearings 23 million times. The ignition points will have to reliably open and close, hopefully firing that poor overheated spark plug, over 23 million times! You get the picture. 23 million is a whole lotta times for anything to happen. The potential for mechanical heartbreak lurks everywhere. I guess that's why a lot of time and thought has been expended in upgrading an already stout (by 1977 standards at least!) piece with durability, reliability, and serviceability improvements. Here, for your consideration are a number of the things we've done to improve our chances of success. 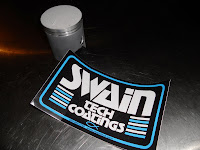 Since we started this by talking about the piston lets begin there. Modern technologies that weren't readily available in 1977 are our friends here. In addition to having a new piston treated with a ceramic coating on the crown and polymer skirt by Swain Technoligies (who do a lot of this stuff for Nascar and such) the cylinder bore was redone in nikasil by our friends and neighbors (only 10 miles from home!) at Powerseal USA. 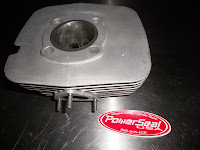 Hopefully this yields a power producing section a little more tolerant of heat, friction, and more resistant to seizing.

The crank got attention too. "Hodaka Dave" Rozier disassembled it, cleaned up the small amount of corrosion on the journals (the bane of old bike stuff that's been sitting around for decades!), carefully checked out the bearings and pressed it all back together while meticulously indexing everything to factory specs. Thanks Dave.

While that stuff was going on with the power producing bits, the transmission and the rest of the drivetrain was getting attention too. First, every rotating piece was crack checked with magnaflux and then shipped off to WPC Metal Treatment Technoligies in California 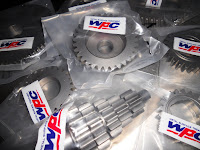 Needless to say, the engine also got the usual new bearings and seals everywhere, not to mention the cleanup and careful inspection of the cases and everything else.

The question of whether to use the oil injection pump or go with premix of oil and gas has been a decision that has brought quite a bit of angst. In order to allow for all eventualities, I went ahead and made the case necessary modification required on 03 Wombats to provide an auxiliary port to let the left crank bearing receive oil from the fuel premix. This is done by drilling a vertical feed hole from the left side transfer port vertically into the bearing gallery. 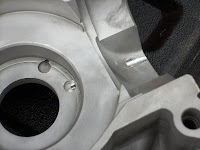 Now I can run premix should I choose. Of course I also did a great deal of bench testing of the oil pumps that I have in stock and picked the unit with the highest flow. Final decision not made yet but at least I have options. 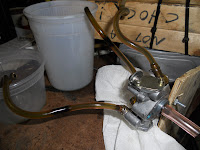 Of course there are other potential sources of mechanical disappointment beyond the engine. This led to a contemporary o-ring chain, 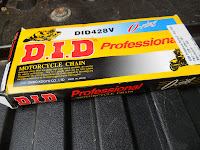 new wheel bearings, and of course, new tires equipped with Michelin Ultra Heavy Duty tubes. These things are 4mm thick and I swear they are so heavy that one could probably ride to Oregon on just the tubes! And, spares will ride with us. 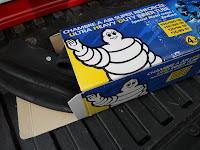 Of course it's not always the complicated, highly technical stuff that gets ya. It's often the simple stuff. Nuts and bolts for example. So torque locking nuts are all over the bikes, even where none were found originally. Thread locking compound (Loctite!) can be found many places and a liberal application of safety wire will also be noted by the keen observer. Here on lower shock mounting bolts but also on oil drain plugs and elsewhere. 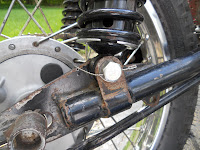 Electrics are always suspect on motor vehicles from the 70s! To help out here we've liberally employed better /more abrasion sleeves on much of the wiring and also helped out a bit where the original wiring left a bit to be desired. Like here under the seat where a great deal of wiring passes through a large hole punched in the frame. Unfortunately that big punched hole has some pretty sharp edges so here (and a couple of other places) a grommet has been fashioned from a split piece of hose, glued in place with weather stripping cement and the risk of a short is dramatically reduced. 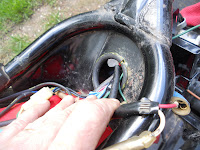 Another issue of some concern is the durability of light bulbs, especially the headlamp which is required to be on in most of the states we'll be passing through. Here's the thing...it's only a 6 volt unit. It's a fairly large item to carry as a spare. And we can't buy a new one at the local NAPA store. We also know that our friend Mike Perrett , who has actually made the trip we're contemplating, got pulled over in Wyoming for not showing a headlamp. The clever solution we've cooked up is a supplemental LED lamp that runs on it's own AAA batteries. Probably won't run it continuously but it'll be there when/if needed. And we can get lots more batteries at Walgreens! 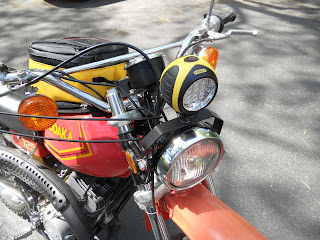 As a last item, I think I mentioned serviceability. A good example is that we've replaced all the phillips head screws that hold the engine side covers on. They are just too much trouble, hard to reliably torque down, subject to getting all bunged up and becoming unusable. We don't want to have to mess with that sort of nuisance when replacing the points along side the road in Iowa so we've gone for socket head cap screws everywhere. Just a couple of allen wrenches and we can field strip our motors to our hearts content! 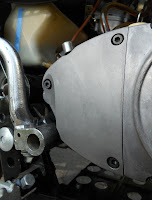 So there you go. By no means is this list complete but it does represent a smattering of the things we've done, and are doing, to help our odds of success just a bit. Testing continues and new items are added almost daily. But in the end it's still an act of faith that these tired old things can endure just 23 MILLION more engine revolutions!
More info to come soon! Enjoy! And thanks for joining us!
Two Strokes Across America is powered by RevZilla.com
Sincere thanks to our supporters including Giant Loop Moto, REV’IT, Strictly Hodaka, Bell Helmets, Martin Motorsports.