Just Who Are Those Two Strokes Anyway ? 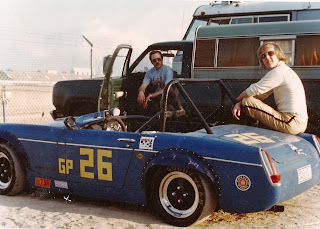 Don Verdiani (l) and Jack Broomall (r) in 1977 when our Hodaka motorcycles were brand new. Come to think of it, we were a bit "newer" ourselves. We've been doing misguided "stuff" together for a very long time!


That official online arbiter of the English language, the Urban Dictionary, tells us that "Stroke" can mean 1. a person of less than average intelligence; 2. an unsavory character; 3. an old person,  i.e. Look at that old stroke in the golf cart; or 4. a person who hasn't a clue. We plead guilty on all charges. (Note: we do recognize that the Urban Dictionary has a few other definitions for "Stroke", many of which are, ahem, .... shall we say, less appropriate, for a family audience. This is however, a story suitable for all ages so we'll just elect to leave that discussion behind us.) Just who are we then, the protagonists in this adventure? The "Two Strokes" if you will. We share a number of common threads. We are both on the disadvantageous side of 60 years of age. We both grew up in Southeast Pennsylvania and live there today, despite having spent many years residing elsewhere. Perhaps, most significantly, we each have spent (or wasted, as some might suggest....) a substantial portion of our lives riding, driving, or otherwise playing with mechanical contrivances. Together we have shared a long series of misadventures going back over 40 years.  If you are in any way intrigued by this adventure then maybe you might wish to know a bit about us individually. Here are our abbreviated bike-ographies! 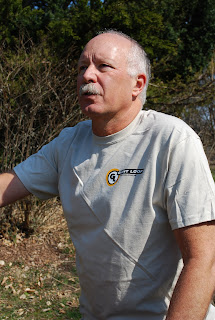 Don Verdiani is a retired Chemical Engineer and serious gearhead. While admitting to starting out with four-wheeled vehicles, the first motorcycle (a 1947 Indian Chief) appeared in the mid-60’s. The first ride was 5 miles on the Indian being towed behind a Studebaker up the hills of Ithaca, NY, probably not the smartest thing he ever did. He and the Indian both survived the trip, the Indian got restored, and Don was hooked on motorcycles, especially saving interesting, neglected ones. Thus a string of Harleys, BSAs, Yamahas, Spanish dirt bikes, and even a Hodaka through the 70’s. Then began the dark time of motorcyclelessness (family, job, etc., etc.)…. 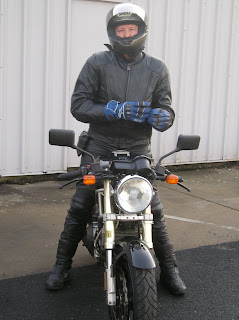 In the early 80’s, a neglected Triumph Trident appeared, followed by a box of Bonneville parts found in a Toledo, Ohio muffler shop, and it all began again. Lonely, unloved bikes started following him home to be restored to their proper, mostly British, state. The current fleet includes three Triumphs, three BSAs, one Norton and two Ariels, some running, some not yet. Recently, some non-British machines have joined the herd, including the most recent addition, a Hodaka 250 SL Thunderdog, coming in pretty sad shape and great need, because this is one that’s going cross country to 2011 Hodaka Days in a few weeks.  Don and his wife Sandy live near West Chester, PA. 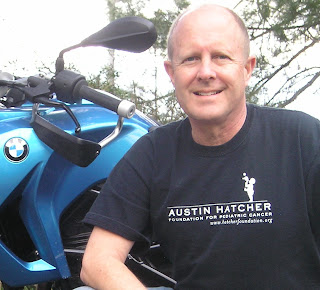 Jack Broomall's motorcycling career also started in the 60's, with clandestine rides on a friend's Yamaha in direct violation of a parental edict which prohibited motorcycling. Later, away at college, he tasted bike ownership for the first time and found that it agreed with him. He has owned and ridden a selection of bikes almost continuously since that time. Interestingly, that first bike, a 1970 Kawasaki 90cc "Bushmaster" was surely the last small displacement two-stroke bike he used for travel - a veteran of several "big" 200 mile trips between school at Penn State and the family home outside Philadelphia. 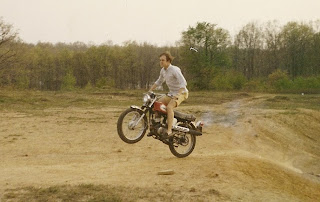 
Jack's subsequent motorcycle adventures have taken him across the North American continent 4 times, as well  to Alaska, the Alps, Italy, the United Kingdom and the Isle of Man. He is a member of the Iron Butt Association and also holds a number of Land Speed Records which he set on motorcycles at the Bonneville Salt Flats. He is a member of the Bonneville 200 Mile Per Hour Club, though no Hodakas were involved in any way in gaining entry to that prestigeous organization! He has also been known to do occasional track days and has a couple of other 70's bike restorations in the works, in addition to the current Hodaka project. He resides in Malvern , PA with his wife Lisa, also a rider, and their cat Koty, who actually runs the household.


In the next installment we'll talk about the two bikes, both 1977 model year Hodakas, that we'll be using in our attempted trip across the country. After that we'll spend some time on our route and travel planning/details. Just two months today till we depart! Please join us!

Two Strokes Across America is powered by RevZilla.com
Sincere thanks to our supporters including Giant Loop Moto, REV’IT, Strictly Hodaka, and Bell Helmets.